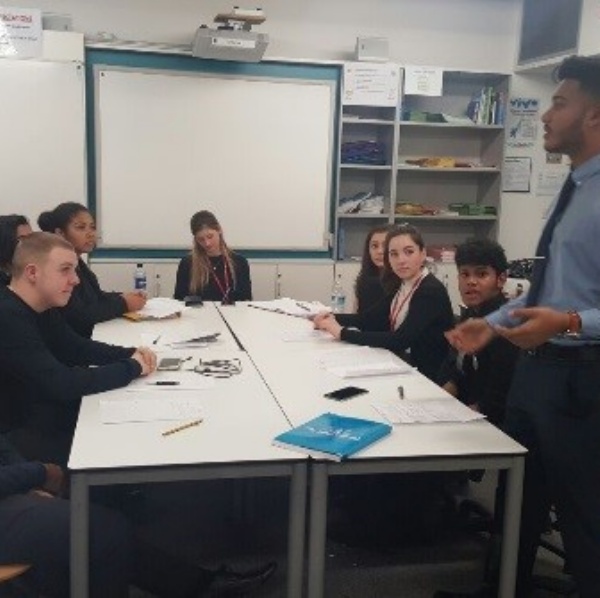 The sixteen students, from across Key Stages 4 and 5, competed in the first round against schools such as Langley Academy, Villiers High School, Harlington School and Rosedale Academy.

It was the first debating experience for most and all performed exceptionally well. Students had prepared the motion “This House Believes Surveillance Has Gone Too Far”.  The teams performed with confidence and poise, especially in their interpretations of the motion and rebuttal to opposing teams. The second debate was on an unseen topic, “This House Believes We Should Decriminalize Drugs”. Here we benefitted from the advice of our student coaches, Mohammed Khan and Athikur Choudhury.  The teams did particularly well, scoring 1st or 2nd place in many debates. Particular mention must go to Suidi Mohamed and Sumaya Dhashane for feisty yet impressive performances!

Other strong performances came from Kara Shipperly and Rosa Beishon, who scored 1st and 2nd place; to Aathithan Luckeeswaran and Hans Aukhaj for their perceptive summary speeches and to Arjola Idrizi and Farhana Choudhury for their teamwork and challenging Points of Interest delivered to the opposing sides.

James, Research Associate at the University of Sheffield said this of the event:

“This is just a quick email to let you know that yesterday evening six UHS students and two former students competed in the regional round of the prestigious Oxford Schools' Debating Competition. Almost one hundred students attended on the night, with just fourteen proceeding to the final of the competition. Although these places were taken by students from Harris Westminster, St Paul's and Tiffin Girl's, all six UHS students acquitted themselves admirably. Debating against an almost entirely private school opposition (who for the most part were also older), the team stood their ground and wholeheartedly took the challenge to their competitors. They all achieved points on the night and Iqra Mohamed (year 11) won her second debate of the evening with a sterling speech.

It has been an absolute pleasure to travel back to UHS over the past six months and to continue working with these students; I have seen them develop enormously as talented and confident public speakers. Although the students are disappointed that they did not qualify for the final, I hope that you will recognise their achievements in some way back in UHS. I have advised them to continue competing in the West London league that I set up last year and I understand from Miss Murray that the debating community at UHS is thriving. I am travelling to Japan later in the year to give a talk about civic education in the UK with Lord Blunkett (who is now an associate professor of my research centre) and I will be mentioning these pupils as outstanding products of effective extra-curricular provision”.