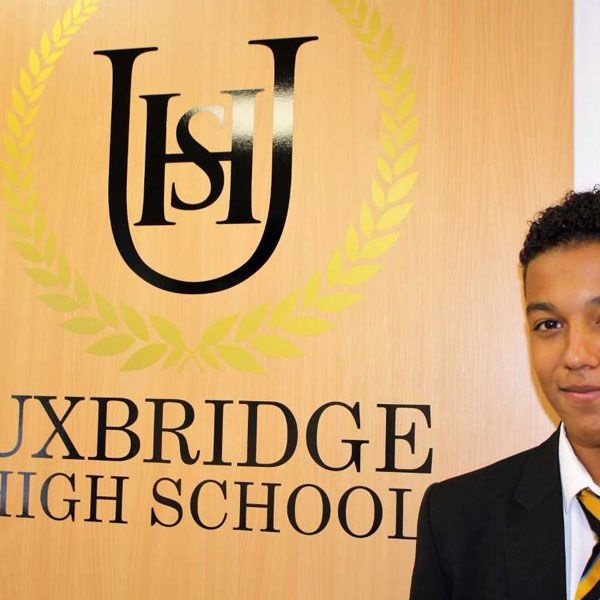 A student from Uxbridge High School has been chosen to become part of the Royal Shakespeare Company’s (RSC) first ever young acting company – RSC Next Generation ACT.

Joshua John from Uxbridge will join 19 other young people who all demonstrated exceptional talent, focus, commitment and passion, when they took part in a series of masterclasses that took place across the country earlier this year.

The masterclasses involved 180 students from the RSC’s Associate Schools Programme*, and were held in Cornwall, London, Kent, Newcastle, Middlesbrough, York, Hull, Bradford, Blackpool and Stoke. The 20 members of RSC Next Generation ACT are all aged between 12 and 16 years old, and were selected by a panel of RSC actors and representatives from the RSC’s Casting and Education departments. Alongside an obvious talent for acting, they were looking to recruit young people who might ordinarily find it hard to break into a career in the theatre.

Joshua, aged 14, started acting at school when he performed in the school’s production of Macbeth in 2015, which was performed both in the school and as part of a Shakespeare festival on Uxbridge’s High Street.

Amy Walker, Uxbridge High School’s Head of Visual and Performing Arts said, ‘we are very proud of Joshua’s achievements to be just one of 20 students in this nationwide acting company. He is incredibly talented and we love working with Joshua in both extra-curricular performances and in the classroom. I am sure he will shine in the company’s performances. We can’t wait to support him throughout this exciting time.’

Joshua John will join the rest of the RSC Next Generation ACT company members later this week when the group will come together for the first time in Stratford-upon-Avon on the 14-16 September 2017. During their inaugural weekend as a company, the young people will be introduced to key staff and departments at the RSC, as well as attend skills-based workshops and classes run by some of the world’s most experienced actors, directors, voice, movement and text experts. The group will also attend mentoring sessions with established RSC actors and begin to familiarise themselves with the play they will perform at the end of their first year together in July 2018.

Talking about the announcement, Robin Belfield from the RSC’s Education department, said:

“The RSC has trained generations of the very best actors, directors and practitioners, but for a long time we’ve been aware that, for a variety of reasons, some young people really struggle to break into the theatre industry. Our Associate Schools programme works in partnership with schools and theatres nationwide, often in areas of significant disadvantage. Those schools work with us for a minimum of two years so we get to know the students really well, and have a clear sense of who has the talent, focus and passion to benefit most from a programme like RSC Next Generation ACT. We are thrilled that we can now offer a potentially life-changing opportunity to some of these young people and help them to hone, develop and make the most out of their extraordinary potential”.

The RSC Associate Schools Programme is the RSC’s long-term partnership programme with over 200 schools and 11 regional theatre partners nationwide that aims to transform experiences of Shakespeare.

Any state maintained primary, secondary or special school can apply to become an RSC Associate School working with us for an initial two-year period with the option to renew thereafter. Based on a hub and cluster models, schools can also become Lead Associate Schools and recruit their own local network of between 10-20 ‘cluster’ Associate Schools.

Further information can be found at www.rsc.org.uk/education.

About RSC Next Generation

From the first ever RSC young company of actors, to discovering the next generation of directors, managers and theatre specialists, RSC Next Generation, is a unique talent development programme for talented young people who might not otherwise be able to access the opportunity to gain experience and explore whether a career in the theatre is for them.

The programme has three strands;