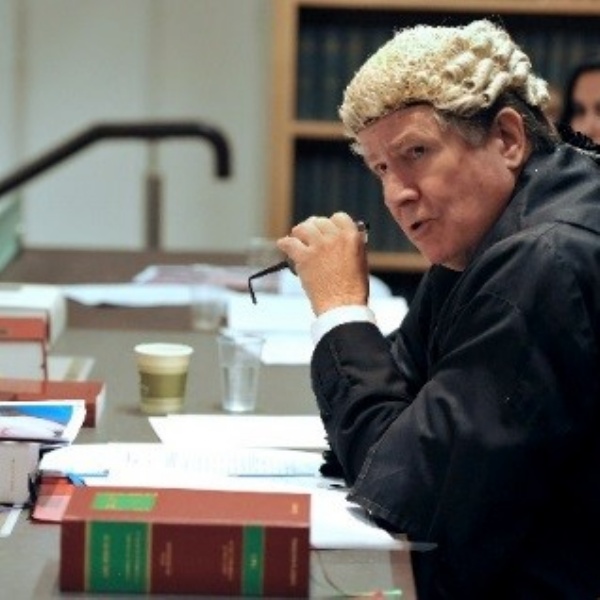 Brunel law school students played the roles of witnesses, the complainant (victim) and the defendant (accused), and acted as members of the board (or jury), in a trial for assault causing serious bodily harm. The law students were examined by professional advocates working for the Service Prosecuting Authority (SPA), who prepared and presented both the prosecution and defence cases for this trial.

The trial took place at Brunel Law School’s moot court. The proceedings were presided by Mr Bruce Houlder CB QC DL, as acting Judge Advocate, first and the former Director of the SPA. Mr Andrew Cayley CMG QC, Director of Service Prosecutions (DSP since Oct 2013), along with several other experienced SPA officers, were in attendance.

After the event, the sixth formers had the opportunity to put questions to the law students about their experience of the trial and studying at Brunel more generally. They also met with law academics and the SPA lawyers, who are all accomplished professionals completing formal further training [via a thorough induction programme] at the SPA.

This is a review that one of our Year 12 students, Hans Aukhaj wrote about the event:

Brunel University and the Law School were very pleased to welcome the UHS students to this event, and look forward to further collaboration in the near future.

Students at Uxbridge High received an experience like no other, alongside Brunel law students.

Students at Uxbridge High were given the opportunity by Ms Rizava to witness a mock trial hosted by the Service Prosecuting Authority. The experience was provided courtesy of the senior lecturer in the Brunel Law School, Dr Giannoulopoulos. The venue for the event happened to be Brunel University, so it wasn’t far for the students to travel.

We were welcomed at Brunel by Dr Giannoulopoulos, who directed us into the room where the mock trial had begun. The moment we entered the room we all felt the tension between the defendant and the prosecutor. The mock case was of two military personnel (one pregnant female soldier and one male soldier). As the case goes, there was a small argument between the two, which meant the case was categorized as an ABH (Actual Bodily Harm) case.

Throughout the evening we were treated with the highest level of hospitality by the members of staff, the SPA and the law students.  After the mock trial had ended we were given the chance to converse with the Brunel students and ask them for advice on their course. The Brunel students allowed us to gain an insight on to what studying law consisted of, or more specifically law at Brunel.