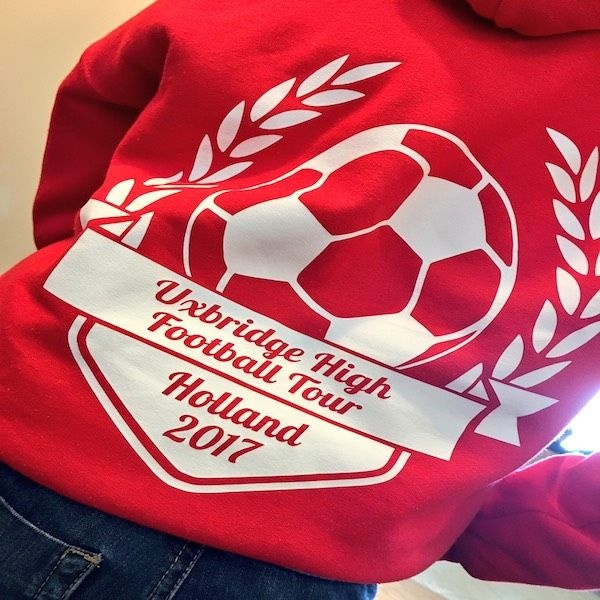 It was a 4.30am departure for staff and students attending this year’s UHS sports tour to Holland. With bags loaded and all 30 students and 4 staff accounted for, we set off by coach for Dover. The students’ tiredness quickly faded, as a buzz of excitement took over. The coach journey and ferry crossing to Calais both went smoothly and other than the constant ‘are we there yet?’ questions, the students were well behaved.

Arriving at our accommodation (Centre Parcs) mid-afternoon on Friday, we checked in to our cabins before heading to the swimming pool to cool down. A couple of hours in the pool was followed by a staff-made dinner of pasta – high in carbohydrates, ready for the next day’s football. With lights out by 10pm, Day 1 was complete. Tomorrow was a big day!

Year 8 were the early risers on Day 2, as they’d been drawn to play in the morning fixtures. Up and back on the coach by 8am, we travelled to host club SV Juliana ’31 for the start of the Juliana Malden Cup 2017. Greeted by blue skies and temperatures in the low 30s, Year 8 started slowly against CVV Berkel, however after missing a few guilt-edged chances they made their dominance count, running out 11-0 winners! A great start was followed up with a 4-0 win over ZVV Zaandijk and a tense 5-3 win against Seastum. Three wins meant Year 8 won their group at a canter.

Having spent the morning of Day 2 in the pool, Year 7 arrived at SV Juliana ’31 refreshed and ready play. It was also a chance for Year 8 to get back on the coach and to Centre Parcs for a swim of their own. Year 7 started slowly, having to adapt to the 11-a-side format on full size pitches, but managed to grab a 2-1 win against JVC Cuijk. Their second game of the day, versus FC Delta Sports ’95, was a thriller, coming back from 3-2 down to score two goals in the last few minutes and run out 4-3 winners. The heat eventually got the better of Year 7 in their final group game, losing 5-1 to Celtic Boys Club. With three teams each finishing on six points, Year 7 were very unlucky to finish third in their group, although the good news was they’d made it through to the top group for Sunday’s finals day. Saturday evening was spent in the pool, watching the FA Cup final and eating pizza – paradise for most of the students on tour. This was followed by some time in the video arcade, before settling down for the night.

Sunday morning and we were woken by a thunderstorm lasting several hours. However, with both teams through to the top group and due to play their matches in the afternoon, we managed to have a relaxing start to the day – getting some much needed rest, before exploring the activities on site. With Sunday being finals day, we knew the challenge ahead of both Year 7 and Year 8 would be much tougher than the previous day. By the time we arrived at SV Juliana ’31, the wet weather had been replaced by blazing hot sunshine.  After taking on plenty of water and getting some valuable words of advice and guidance from their coaches, the Year 7s and 8s were very much up for what would be a big day’s play.

Year 8 had been drawn against Luton Town Academy, Juliana ’31 and Karlslunde Fodbold, with Year 7 due to play Luton Town Academy, FC Delta Sports ’95 and SV Koedijk. A number of tough games followed. Year 8 scored in the last minute to record an impressive 3-3 draw with Luton Town, before beating hosts Juliana ’31 8-1. It all came down to the last game, with Year 8 needing to beat Karlslunde to make it to the final. A tight encounter, with some questionable refereeing decisions, ended 1-1 meaning Year 8 were though to the 3rd/4th play-off. Year 7 began with a 3-3 draw against SV Koedijk, missing a number of key chances to take victory. A 5-0 loss to Luton Town and a 4-1 loss to FC Delta Sports followed, as the Year 7s ran out of energy in the hot and humid conditions. A more than respectable 6th place for Year 7. So stifling were the conditions that the Year 8s opponents – Whitkirk Wanderers – suggested a friendly penalty shoot-out for the 3rd/4th place play-off, to which we gladly agreed. What followed were a number of crazy penalty attempts (back-heels, flicks and tricks) in what was a truly memorable way to finish. So it was a 3rd/4th place finish for Year 8 (officially 4th).

A memorable few days in Holland were finished off with a trip into Eindhoven to see PSV Eindhoven’s stadium and to have a look around the city centre, before heading back to Centre Parcs to pack up and be ready to leave on Monday morning. With all 34 on board by 10am Monday we left for the return journey to the UK, making good time before being held up by UK Customs in Calais. Still, it didn’t put a dampener on what had been a memorable trip for all involved. So successful in fact that plans are already in place for our next sports tour in 2017/2018.

Player of the Tournament: Frankie

Player of the Tournament: Will