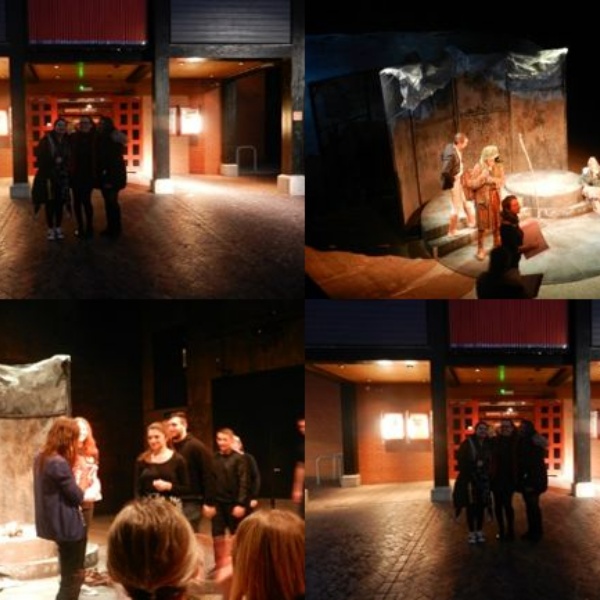 As we are a Lead Associate School to the Royal Shakespeare Company, three of our students were invited to take part in their work experience programme, the Backstage Pass. This opportunity was offered to all Sixth Form Performing Arts students, who then had to apply for the opportunity.  There was an Open Day held on the 9th December, where the three successful applicants went to Stratford-upon-Avon to explore the departments they could work in and to meet the staff. They chose Technical Theatre, Props and Costumes.

Then on the 17th January the students went up to stay in Stratford-upon-Avon and worked for four days in their chosen departments, culminating in a performance with the actors from the RSC’s current production of The Tempest.

Two students have written about their experiences:

Working in technical theatre was a completely new experience for me, so I was naturally pretty nervous when I arrived in one of the Royal Shakespeare Company’s theatres in Stratford-upon-Avon on Tuesday. Luckily, we were supported by industry professional, Simon Spencer, who managed to teach us so much about not only the lighting set-up and programming, but also how to design lighting for a stage performance in just four days. Lighting a show like The Tempest was particularly interesting, because we were able to portray not only the harsh, naturalistic environment of a desolate island, but also the magical (and in our version, colourful) environment conjured when Prospero summons Ariel, his magical servant.

The process began by watching a rehearsal of the scene and later discussing the types of colours and angles which would be best for particular shifts in time and atmosphere. After setting up the various colours and positioning the lamps perfectly (it takes longer than you would think), we trialled various lights together to see which lights would be appropriate for each section of the scene, quickly learning that you need much more open white light than we anticipated to actually light the actors’ faces! In addition to applying our own ideas, we had to take into account the interpretation of the director and his lighting requests for particular moments of the scene. I sat in with him, during a meeting, and he informed us that he wanted characters frozen in time with white light, which involved being flexible with the choices we had already made for said moments to incorporate such.

Friday – the performance date – was incredibly rewarding, as we were able to see the work completed not only by the technical team, but from all other departments, come together to create a visually dynamic and atmospheric production. While the technical rehearsal was complex and lengthy (adjustments had to be made to lights, sound, digital projections, costume, set and props), watching the final performance made all the hard work worthwhile.

Although I have said it many times, thank you so much again to the RSC for giving us the opportunity to work alongside such dedicated and knowledgeable industry specialists.  It provided me with a fascinating insight into theatre that I have never been given whilst just being onstage in the past. Thank you in particular to Simon, for guiding us through the process so patiently and efficiently!

Getting to work alongside the Royal Shakespeare Company was an absolute dream. As someone who aspires to work in costume someday, this experience was more than valuable for me and I was so lucky to be able to be one of three people from my school, and one of the few schools across England, to do so. The work experience lasted a week in Stratford-Upon-Avon, the home of Shakespeare.

The final project for the week was to put on a scene from The Tempest (Act 1, Scene 2) with professional actors Jenny Rainsford, Mark Quartley, and James Tucker who were in the cast for the Tempest at the main theatre, which we went to see later in the week. For costume, I was in charge of the character Miranda, whilst coordinating with the designer, we had decided on a specific look for Miranda. On Tuesday, after the design brief was given, we did the measurements of all the actors in order to prepare searching for items later in the day and on Wednesday. We searched for the suitable costume pieces on all three floors of the RSC Costume Store. Some of my favourite pieces included a turquoise military coat and a gathered blue and cream skirt with a sea salt stained trim that really brought together the whole costume.

My favourite part of creating this costume was ‘breaking down’ Miranda’s t-shirt, which mean patching up, ripping, and fraying the edges of the costume to show it had been worn by someone who has lived on an island for the past 12 years, which we did on Friday after the technical rehearsal. On the day of the performance, I was able to do Miranda’s makeup and ‘dirty down’ Miranda and Prospero to look post-adventure, in contrast to the well-dressed spirit Ariel. All the actors were so nice and worked around their already busy schedule to patiently work with our departments during this hectic week.

I don’t think I’ve expressed my thanks enough to everyone at the RSC for this week. I got some very helpful advice from the Designer and Costume Supervisor about a future in Costume Design and I will take that to heart. The education staff and everyone who worked at The Other Place were so nice and made the week enjoyable for everyone. And a last thank you for the everlasting patience to pretty much everyone there as we worked through the short time frame that we had to put this production on. It was so fun and I will never forget this experience, not many people can say they’ve worked at the RSC!